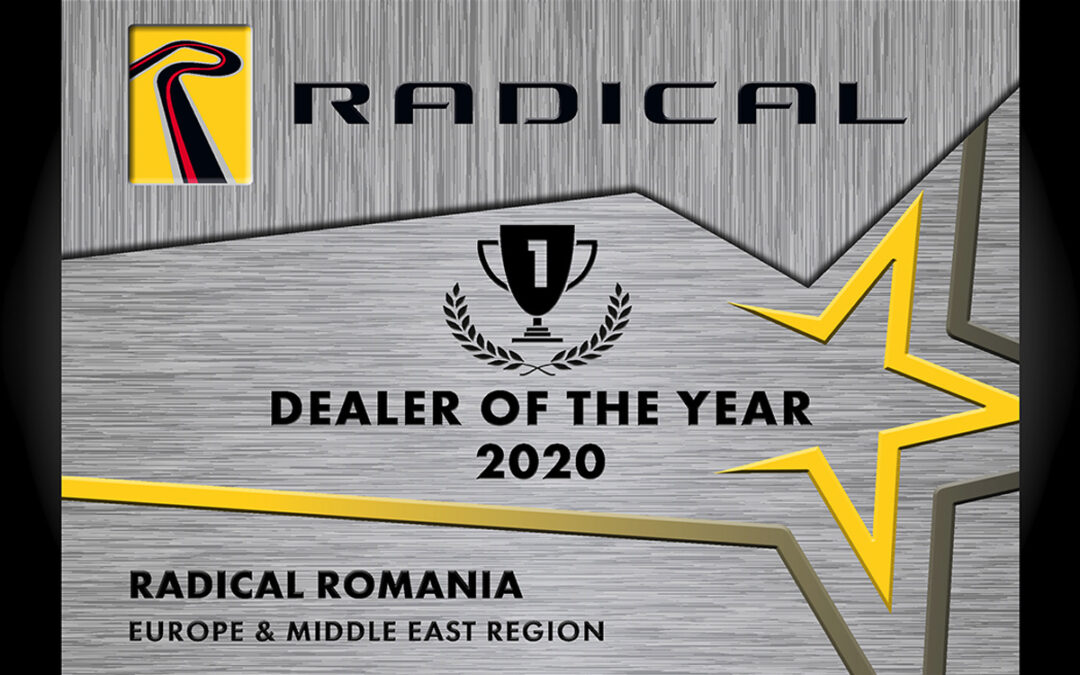 Peterborough, Cambridgeshire (UK); Radical Sportscars – the world’s most prolific racing-sportscar manufacturer – is pleased to announce that the official Romanian importer, SMART DRIVING, has won the prestigious Radical Sportscars Dealer of the Year 2020 award for Europe and the Middle East.

Radical Romania marks the first official presence of the world’s preeminent manufacturer of racing sportscars in the Balkans region, and this award comes just three months since the launch of Radical Romania by SMART DRIVING in October 2020.

Bucharest-based SMART DRIVING was established in 2014 by owner and chief instructor Andrea Fogliazza as a defensive driving academy. Operating from the new MotorPark Romania facility, Fogliazza and his team deliver 60 performance driving schools to over 1200 drivers every year. With a growing Romanian motorsport market and close ties with governing body FRAS, Radical Romania was launched to cater for drivers wishing to take the next steps into competition.

Radical Romania is making the Radical experience more accessible than it has ever been in the region. An initial order of four entry-level SR1s are available to lease for track days and a variety of racing series, and Radical Romania also offers new Radical car sales, technical assistance, setup advice and spare parts. The team will also be campaigning a new Radical RXC Coupe in various race events in Romania and Europe.

Radical Romania’s technicians have recently completed training at Radical’s Peterborough, United Kingdom, factory, equipping them with the knowledge and direct access to deliver the trackside support and hospitality that Radical has become famous for.

Drivers of Radical sportscars are spoilt for choice in Romania. Between official test days, the Romanian Time Attack Challenge, Endurance Championship and Hillclimb Championship, there is plenty of opportunities to compete.

While being based near MotorPark Romania, 40km from central Bucharest, Radical Romania also has a strong presence at Transilvania Motor Ring in the north of the country.

These events will be joined in 2021 by the debut season of the Radical Romanian Cup, which is set to further bolster the success of the brand in the Balkan region.

“We are thankful and truly blessed to receive the Radical Sportscars 2020 Dealer of the Year award,” commented Fogliazza, Radical Romania General Manager.

“Everything we have achieved so far is only due to the people who believed in this project, who dedicated their time and resources, eager to get results, and formed the Radical Romania family. We have turned into incurable enthusiasts since our first contact with the Radical Sportscars team, who challenged us to level up the motorsport market in Romania and we responded without further comment.

“This big step forward would not have been possible without the support of our brave partners – Delta Glass, Ramplast, and Avia Motors. Together we’ve been able to develop packages that bring a huge opportunity for every racing driver, regardless of age or location, to compete in any competition in Romania.

“Nothing compares with the opportunity to create the first chapter of Radical Romania’s journey which is overwhelming, but the Radical Sportscars 2020 Dealer of the Year title motivates us even more and makes us responsible for writing together a future to be proud of!”

“Andrea and his team at Radical Romania have made a remarkable start since joining the Radical family. The compelling combination of track tuition and driving coupled with their deep understanding of the varied race disciplines within the Balkan region has been key to their success. As racing drivers themselves, they understand the value that Radical Sportscars can bring to motorsport in their region and their enthusiasm has been clearly demonstrated by the formation of their impressive RLR Radical Sprint Cup digital series in iRacing in advance of actual on-track activities.”